Debt Counselling South Africa will close their offices from Dec 24th till Jan 9 2011
No comments:

The SDC Charter has been completed.
To download the finished product visit: http://www.sdc-sa.co.za/
No comments:

Recently the SDC website (http://www.sdc-sa.co.za/) has been acting up. Many visitors have not been able to get onto the site. We doubt this is the work of anonymous web hackers. Probably it is just a hosting issue.

However if you do manage to get on feel free to have a look at the SDC Charter, which is open for comment.
No comments: 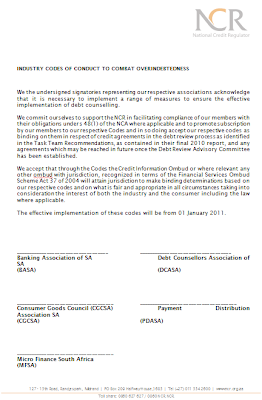 On the 6th of December a milestone was achieved with the signing of the document above by all parties involved in Debt Counselling to indicate acceptance of the Task Team Agreement as well as the Code of Conduct for Credit Providers, Debt Counsellors and PDA’s.

The acceptance of the Task Team Agreement and the Code of Conduct by all parties enables the implementation of voluntary process enhancements and restructuring rules in 2011. Non compliance to the voluntary agreement can be reported to the Credit Ombud.


The Task Team Agreement represents a voluntary agreement to standardise forms, enhance the debt review process and to implement a set of restructuring rules. This agreement is not in conflict with the requirements of the NCA but a voluntary agreement to unlock the bottlenecks in the debt review process and to facilitate automatic acceptance of repayment plans that conforms to the restructuring rules. This agreement was the result of 257 hours of work by the Task Team over a 12 months period.


The enhanced process and restructuring rules should have a positive impact to the work of Debt Counsellors but Consumers stand to benefit most from the voluntary Task Team Agreement. The process will be streamlined to expedite completion of the debt review and in addition the Consumers will benefit greatly from the fee and rate reduction agreed in the restructuring rules.
No comments:

DCASA has approved a new Membership fee structure . Registered Debt Counsellors can now elect to join as an Associated Member (R65/mthn) or as a Full Member (R300/mnth) of DCASA.

A great deal of work has been done by DCASA. Over the last four years DCASA has built up it's membership to 230 members. They have tackled the issues of the Debt Counselling Fees, a Code of Conduct and the appointment of an Ombud who will deal with Debt Review matters. Why is such an Ombud so important? Well while the NCR will continue to perform it's statutory role, the Credit Ombud will be able to rule on industry debt review matters where voluntary agreements (beyond the NCA requirements)have been reached. This is a great leap forward, as DC's can now for the first time ensure that all parties keep to the signed NCR Task Team guidelines.

DCASA has established branches in most Provinces and we will shortly be providing you with the details of the planned meetings for 2011.

During February 2011 all DCASA Provincial Branch Committees will be re-elected and in March a Special General Meeting will be held and the NEC will be re-elected.It is therefore necessary that any DC who wishes to join DCASA does so prior to the end of Jan 2011 to be eligible to vote and be elected to any of the structures within DCASA.
No comments:

Need Help? We Will Call You

https://debtfreedigi.co.za/
If you want to know how debt review works or want to know what questions to ask a debt counsellor when thinking about debt review.
The Debt Review Process Explained step by step

Click the Picture to visit our Archive of older issues of Debtfree DIGI. You can read them online for FREE

Stay Ahead of the pack by advertising your company and the services you offer.
This niche magazine is highly targeted and industry specific.
Don't waste your money on "shotgun" marketing this year.
Contact us for our reasonable rates:
magazine@debtfreedigi.co.za

Gerard le Roux is a CV writer & guerrilla job search coach. You may have seen him quoted in newspapers or heard him on radio.
Get job hunting advice at:
www.jobsearching.co.za